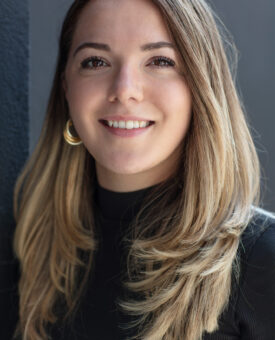 Ciara is naturally musical, having played the drums at school. She started to frequent open mics with her friends in her teens and is regularly seen at festivals and gigs. Ciara’s love for post-production came about following summers spent running for companies around Soho. She started at GCRS as Trainee Bookings Scheduler in 2017, and completed the APA Masterclass in 2019. Ciara loves the multi-faceted aspect of her role, which encompasses ADR and podcast producing to large scale advertising campaigns, working alongside a wide spectrum of talented people.

Two of her favourite musically-led GCRS projects are BT Song with Munzie and HSBC Sounds of Home where influencers from around the world recorded sounds which were then used to create soundscapes streamed across various platforms.

She has vowed never to turn down a gig or a festival post-Covid.

Ciara has produced audio on projects for brands such as Starbucks, Pokerstars and Adidas Arsenal and is currently working on a documentary – more to follow!