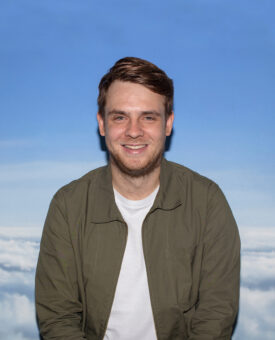 George is an audio fanatic. His first piece of sound kit was an 8-track recorder for his band when he was 14 – George played the drums but much prefers producing on DAW these days.

George is known for creating original sounds for most of his projects, whether that’s recording crowd, Foley or Cinematic SFX. Notably, he has created dramatic compositions for Adidas, an entire library of sounds for gaming platform Microsoft Hololens and perfectly encapsulated the atmosphere of a coffee shop for Starbucks.

When he’s not at GCRS, you can normally find him chilling out in his home studio, creating more sounds from scratch with his synth collection.