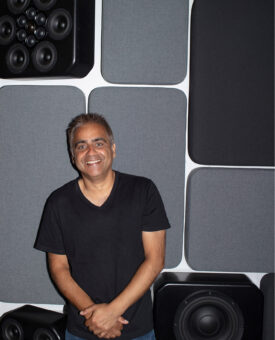 Once described an audio auteur, Raja has been obsessed with everything sound since he claimed a freebie radio from a cereal box promotion (Frosties, of course) at the age of five. By the age of 14 Raj was producing sound at the Edinburgh Fringe.

As one of the UK’s leading sound designers and mixers for cinema and TV advertising he has been responsible for delivering audio excellence to some of the world’s most acclaimed ads for over 30 years, many of which have been nominated for, or won, every major creativity award in the world – and he’s won Gold at every UK festival.

Iconic spots include Nike “Write the Future” and “Awaken The Phantom”, Jaguar’s “British Villains” and international TV and Cinema work for Heineken including “Entrance” and “Date”. The scale of his work stretches from global TV campaigns to live music concerts, and from theatrical mixing in Dolby Atmos, to designing and installing live immersive audio experiences. He sits on the digital sub-committee of SAWA, the Global Cinema Advertising Association, ensuring excellence and innovation for global cinema advertising. When Raj isn’t in the studio he can be found wading through his garden pond to capture underwater Foley.