Latest - There’s Some Hockey In You

Latest - Rise of the Kids

Latest - We Got Now

Latest - You Can Handle Anything

Latest - Flight of the Pension Bee

Latest - Rage on the Red Sea

Latest - The Kids Have Spoken

Latest - Your World. Nothing Else.

Latest - OnTheMarket, Get Real About Moving

Latest - Walkers, Only on Holidays

Latest - Stone X “Timing Is Everything”

Nike: Victory Swim, awarded a Bronze Clio for Sound Design and a Bronze Cannes Lion for Diversity and Inclusivity, was no mean feat to deliver. Due to lockdown, Raja Sehgal recorded the dialogue remotely with the actor who was based in Egypt. The majority of the underwater sounds you hear were created using a special underwater microphone called a hydrophone. (Raja’s pond stood in for the Red Sea.) These recordings were then manipulated with the music stems working to tell the story which resulted in a really beautiful piece of work.

The unique creative treatment involved a theatrical stripped back set, creating a sense of bleakness. The sound therefore needed to be approached in such a way as to allow the viewer to step into the vicious circle.

The creative team wanted the voiceover to be machine-like, devoid of emotion as if it were the voice of ‘the system’. Renowned actor, Juliet Stevenson was cast and, after her voice was recorded down the line, it was pitched to make it feel monotonous with reverb added to give a sense of detachment.

We visited the film set to record the mechanical sounds of the revolving stage and foley recordings were layered into the final mix.

The third element was the music, purposefully manipulated like a scratched, stuck record ensuring a repetitive undertone. It was important that this did not dominate the mix but that centre stage was given to the vocal performance.

Work we love - Childline, Nobody is Normal

This beautiful campaign, in collaboration with The Gate London, has picked up multiple awards including 3 D&D pencils and 5 Cannes Lions, including a particularly proud moment for us, a Silver Lion for the Use of Adapted Music. In a Pandemic year when home life was incredibly challenging and sadly often unsafe for many young people, Childline’s campaign became even more paramount. The client came to us with a beautiful stop-motion animation and no pre-existing sound, but a clear brief that they wanted to encapsulate anxiety. Gary expertly designed unique sounds to bring the puppetry to life, using distinctive crackling, fizzing effects all mixed to the Radiohead classic ‘Creep’. This is a true example of how sound completes a piece, and allows the original message to be conveyed in what is an important piece of work.

Work we love - Argos, The Book Of Dreams

This feel good campaign has music absolutely front and centre and has picked up multiple awards for Munzie’s sound design and mixing. The choice of track was essential. There had to be drums – as the father spots his dream drum kit in the Argos catalogue – but also be able to create an emotional arc that would end on a high. Achieving the end result was no mean feat and with no voiceover to narrate the advert whatsoever, perfection was arguably even more important. The epic father-daughter drum duet meant that the original backing track, Simple Minds’ Don’t You (Forget About Me), needed to be extended and a fill needed to be recreated. With no existing stems for the original track, the baseline and synth, a Roland Jupiter 8 synthesiser straight out of the 80s was hunted down and delivered to the studio. Finding the exact pre-set was tricky but within a couple of hours a new synth section was recorded. The result is a seamless track and spot that can’t help to put a smile on your face. 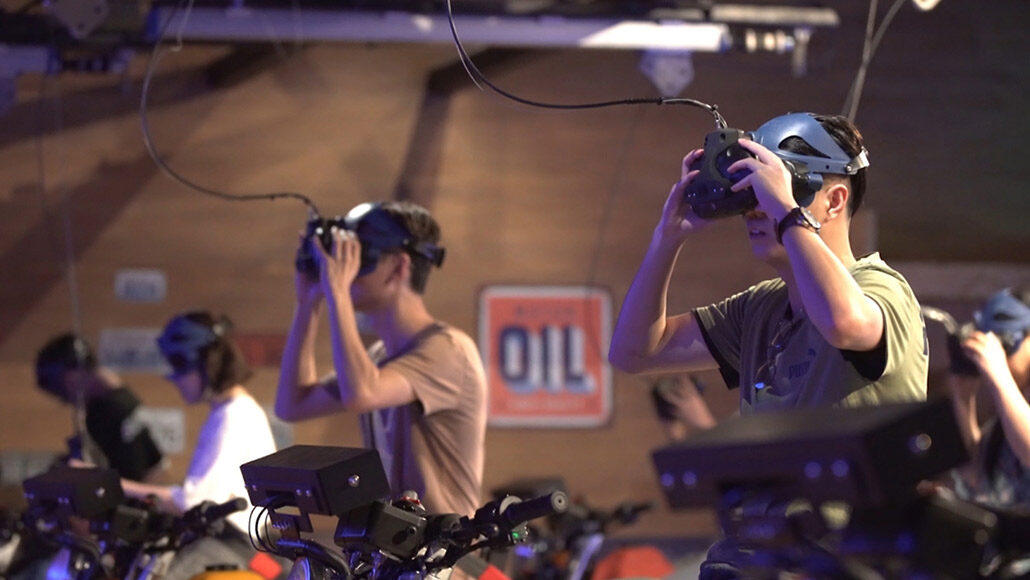 Midnight Ride encapsulates the breadth of our capabilities in immersive sound. Framestore brought us on board to help create a group VR experience in one of the most hotly anticipated theme park launches in Zhuhai, China, Lionsgate Entertainment World. They devised the amazing real-time virtual media and we designed and integrated all of the real-time sound. Midnight Ride provides fans of the global phenomenon, The Twilight Saga, the unique opportunity to mount real motorcycles and become immersed in the Twilight world, joining Jacob Black and his wolf pack on an adventure through the forest before being hunted down by prowling vampires. We created a realistic representation of the ride in our immersive audio studio in London to ensure the sound would translate well once installed at the park in China, followed by two weeks on site in China to complete the work.

As each dirt bike was rigged with a hyper-directional loudspeaker, this gave each rider a unique aural experience whilst not isolating them from the sounds (and screams) of other players around them. With the deployment of gaze detection, real-time mixing occurs throughout the experience whilst the cinematic music is programmed to ensure key moments always hit specific points within the flexible game-engine narrative. This project won the Outstanding Achievement in the prestigious Themed Entertainment Awards.

Pets at Home, Better with Pets

We’ve worked with Nike for over 20 years and have been integral to much of their iconic work that has continuously broken the barriers of TV and cinema commercials. The most awarded spot of all time, ‘Write the Future’ exceeded 300 audio tracks (a record at the time) and involved multiple scenes – live action and animation – that needed to be seamlessly blended together. Put simply, the extent of the sound design had never been heard before and is still considered one of the greats.

Droga5 and Facebook sought to bring personalised ads to life in support of small businesses with this rhythmic, poetic piece.  Grace Jones’ electro-robotic voiceover was recorded remotely in London via Jamaica during the Pandemic, with all sound timed to the beat of the chosen track.

Work we love - FitXR, Workouts For Everyone

Work we love - Starbucks, It Starts With You